Skip to content
Home » Bed Bugs » What Chemicals Do Exterminators Use for Bed Bugs?

What Chemicals Do Exterminators Use for Bed Bugs? 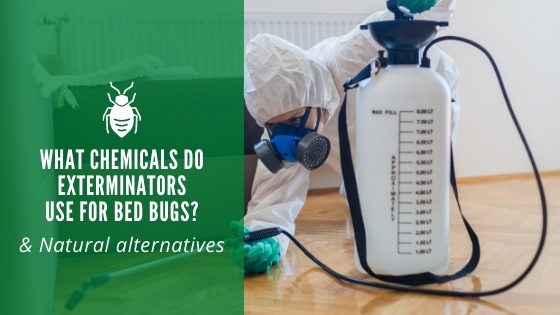 Bed bugs are a common problem in the United States, especially in cities. If you are an apartment-dweller, it is more than likely that at some point, you will have to deal with a bed bug infestation.

The first thing you might be tempted to do is to call an exterminator immediately, but there are some reasons why you might want to do some more research before you pick up the phone, especially if you have children or pets. Here are some things you need to know about getting rid of bed bugs.

How do exterminators get rid of bed bugs?

How dangerous are bed bug chemicals?

The PennState Extension reports that insecticide poisonings are a major cause of poisoning deaths in the United States. Organophosphates, chlorpyrifos, diazinon, dimethoate, and others that are sometimes used in bed bug control can cause acute symptoms and even death in some people.

The reaction to these chemicals depends on the amount of exposure and the sensitivity of the person. Long-term exposure has been associated with rashes, inflammation, body aches, headaches, and others. Much of the danger depends on the exact chemical used, how it is applied, and how often it is used.

If you are sensitive or have children or pets, you should consider this before calling an exterminator. If you do call one, make sure to ask about the methods they use.

How long does it take to get rid of bed bugs after extermination?

How long it takes to get rid of bed bugs after extermination depends on several factors. The first is the chemical used. Some bed bugs have become resistant to pyrethrins, pyrethroids, and other chemicals, so the exterminator might have to try different chemicals until they find the right one.

Another factor is that you have bed bugs in all stages of the life cycle in a mature infestation. Some chemicals only work on bugs at a certain stage. This means that it will take multiple applications over weeks or months until all the bed bugs are gone.

Another factor is that if you have a source outside your home that you cannot control, like neighbors, you will have a more difficult time getting rid of them because they keep reinfesting. Many of the chemicals used by exterminators are residual and leave a film behind.

These can help with reinfestations and kill bed bugs through their life cycle, but it also means that you have residual harmful chemicals around your home. This can be a concern if you have small children or pets, even if the company claims they are safe.

When should you call an exterminator for bed bugs?

The bottom line is that because of the way chemicals work to kill bed bugs, they might not be effective, or you might have to pay for repeated treatments that have little or no effect in the end. Then, there is continual exposure to toxic chemicals over a longer period.

The question is if there is ever a time when you should call an exterminator. There might be cases where it might be the right thing to do, but only as a last resort.

Let’s say you move into a new home that already has a large, active population from the previous residents; then it might be a good idea to call an exterminator to knock down the numbers so that you can get it under control. It would also be a good idea to hire professional cleaners to make a fresh start too.

Are there any natural ways to get rid of bed bugs?

The good news is that there are some natural ways to get rid of bed bugs without harmful chemicals. One of the most popular ways is with diatomaceous earth. You can also use borax, which is a salt of boric acid. These products are a fine powder sprinkled around cracks, furniture, and other places where bed bugs can hide.

Diatomaceous earth and Boric Acid are natural substances and are not harmful to children or pets. They are desiccant, so they work by drying out the insects and eggs. There is no way for the bugs to develop resistance, but it can take days or weeks for you to start noticing a population decrease.

Diatomaceous earth can be spread around your bed’s box spring, your home’s baseboards, around the perimeter of your home, and many more places.

Neem Oil is sourced from a type of tree in Southeast Asia and Africa. It is classed as a biochemical pesticide that is both an insecticide and an insect repellent. Bed bugs will avoid any area sprayed with neem oil. It also has medicinal properties and is used in some shampoos and soaps.

There are also nonchemical methods for killing bed bugs. These include heat, cold, and steam. The best way to rid yourself of them for good is to develop a solid strategy that includes housekeeping and a plan that uses multiple methods at once. The good news is that with diligence, it is possible to get rid of them for good. Why Do Bed Bugs Smell When You Kill Them?