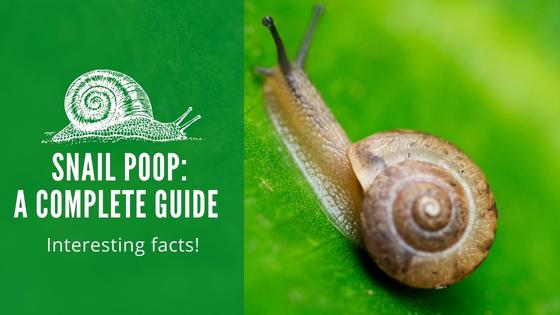 Snails are fascinating creatures that hold many mysteries. On top of gliding around on their body, which is made up of a muscular foot, they carry a shell they can hide in for protection. A snail’s shell also disguises many of their normal activities, which might lead you to wonder how or if they even poop.

If you’ve found some strange-looking pieces of matter around your garden or outdoor space, you could easily have spotted snail poop. Like other living creatures, a snail will spend a lot of time consuming different types of food they find in their environment.

Snails are mostly herbivores, and they’ll happily nibble away at most produce and leaves you can find outside. When food is scarce, they also feed on decaying plant matter, such as fruit that has fallen from a tree.

Although it is rare, some snails are carnivores or omnivores. If they eat meat in their diet, a snail will typically feed on earthworms, other snails, and even animal waste products. Naturally, a snail that eats will need to excrete the waste from its food that its body doesn’t need for energy.

How Do Snails Poop?

Snail pooping habits are frequently misunderstood, and you might have even heard someone mistakenly say they poop out of their heads.

While this isn’t true, it is easy to see why someone would make this mistake once you look at a snail’s anatomy.

When a snail eats, the food is broken down by digestive juices and moved through its system with muscular contractions, much like you see with humans.

Then, the food moves to the gastric pouch. Here, the digestive gland further breaks down the food, and the body absorbs the nutrients.

While the snails technically poop in their shells, there is a small opening along one side of their shell where their waste products come out. Interestingly, this area of their body is also where the snail’s lungs are located, which means they breathe and poop through the same hole in their shell.

Since the hole is located close to the snail’s head, it often looks like snails are pooping through their mouth or front part of their body.

Do Snails Poop A Lot?

They can, although there isn’t a generally recognized amount of pooping that is considered normal for snails. Instead, snails typically operate on the principle that what goes into their body will result in some poop coming out.

Snails tend to poop more often when enjoying an abundance of food. During times of scarcity, they won’t poop as much because their body won’t be making as much waste.

You might also notice a lot of poop if there are a lot of snails in the area. All land snails are hermaphrodites, meaning they can all lay eggs. Typical brown garden snails lay around 80 eggs at a time, and they can do this up to six times a year.

Snails often stay close to where they hatched, which can lead to large populations of adults in environments that give them a high survival rate.

Snail poop has a rope-like appearance and tends to be long and slender, much like you would expect to come out of a tiny shell hole.

Once it dries, the poop becomes thinner. The ends of the poop strand will also start to curl inwards, which creates a c-shape. The color of snail poop can vary according to what they eat in their diet. Snails that eat a lot of dark, leafy green vegetation may have dark-green or brown poop. Meanwhile, one that chows down on sweet potatoes will have orange excrement.

If you see white snail poop, this is a sign that the snail might’ve been absorbing a lot of calcium from the soil or other food sources.

The snails’ inability to digest dye has even led to an artist feeding them colored paper to make unique, sustainable tiles from their poop.

Is Snail Poop Good for Plants?

Snails can be particularly destructive to plants in general, but their poop makes a surprisingly good fertilizer. Snail poop is full of nitrogen, phosphorus, and potassium, which are all elements that plants need for growth.

Essentially, snails eventually return some of the nutrients of the plants that they eat back to the soil, which then makes it possible for new plants to grow.

Can Snail Poop Hurt You?

Under normal circumstances, snail poop shouldn’t cause you any harm. You likely step on snail poop regularly when you walk through any outdoor area. However, it is still best to protect yourself using gloves if you must come in close contact with snail excrement. Just in case it is harboring any bacteria that could make you ill.

When Is Seeing Snail Poop a Problem?

If you happen to see snail poop out in the wild, it might not be too much of a problem. However, you may want to investigate if poop exists in your lawn or garden.

Snails can quickly destroy a large amount of vegetation in a short period. If you see lots of snail poop in your garden, you might have a pest infestation that needs treatment to keep your plants in good condition. The sudden arrival of many snails could also signal a problem with invasive species. Some snail species are especially known for reproducing rapidly and ruining outdoor spaces, especially crops designed for food production.

How Do You Get Rid of Snail Poop?

Those curly bits of poop might not be harmful, but they could still be unsightly in your yard. You can usually use a hose sprayer or a bucket of water to rinse the poop off of hard surfaces and onto the ground where the soil can absorb it.

Once the poop gets wet, it will begin to biodegrade faster, which gives the soil a healthy boost of fertilizer that can help the grass grow greener.

Poop that is stuck to concrete or other hard materials can be scrubbed off as needed. Power spraying is another option for getting rid of stuck-on poop.

Finally, you’ll want to remember that the best way to eliminate snail poop on your property is to keep those slow-moving creatures away.

If you have a snail infestation, you can explore natural methods to deter them from coming near your space. Snails need moisture to survive and keeping things as dry as possible may make your yard less inhabitable.

Large populations of snails may also require more intensive forms of control, especially if they are invasive or harming your plants. At the end of the day, the fertilizing effects of their poop aren’t worth it if they are tearing up your garden. How Long Do Chiggers Live?