Skip to content
PinterestYoutube
Home » Wasps » How to Vacuum Wasps

How to Vacuum Wasps 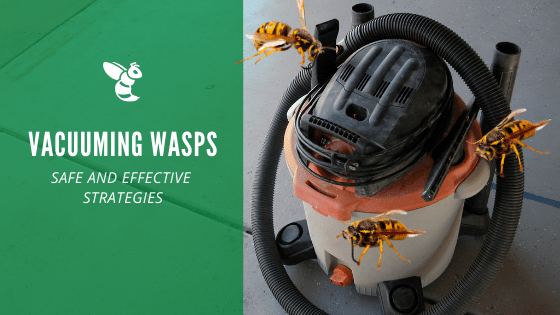 While you can hire professionals to address a wasp or insect problem, there are plenty of DIY ideas that you can utilize on your own. This is a great way to save money, and you can also take care of the problem in a way that is up to your standards.

Have you ever heard about the method of vacuuming wasps to remove them? It’s a quick and safe way to remove wasps from inside or outside of your home.

How Long Can a Wasp Live in a Vacuum Cleaner?

The life expectancy and strength of a wasp depends on the species. However, the general life span of a worker wasp is approximately 12 to 22 days.

When they are vacuumed up into a canister or vacuum bag, they’re not going to survive very long because they can’t escape to find their next meal. They may also be exposed to temperatures or conditions that aren’t very favorable to their survival.

If you have dust and other particulates inside your vacuum container, this can create a very dangerous and abrasive environment for the wasps you’re sucking up. They have the potential to die within the hour or after a couple of hours.

This is a chemical-free method to remove wasps, so you have to expect that the wasps will not die immediately. Luckily, the wasps are permanently trapped inside the vacuum, and they can be eradicated shortly after.

How to Make a Wasp Vacuum Trap

There are several wasp and insect vacuums on the market. They are designed to remove wasps from an area that you are near effectively. You can also use your regular household vacuum or shop vac to create an effective wasp suction trap.

Make sure that you have a unit that will hold the wasps safely inside until you’re ready to release or throw them away (if you decided to kill them inside with soap and water). It’s best to hold off until you don’t see or hear any more movement inside of the vacuum.

If you’re creating your own wasp vacuum trap, you’ll need to create a larger mouth to the vacuum’s opening. Trying to trap and vacuum several wasps at once with an attachment that only has an opening of a couple of inches isn’t going to be safe or fast enough.

You can use an old milk jug or pop bottle to create a homemade bug vacuum attachment. Cut off both sides of the bottle or jug. Tightly tape one side of the plastic to the extension on your vacuum. The other side should be a large opening that you can place right over a nest or near a hole where they’re coming out.

How to Vacuum Wasps Safely

Even though you have a vacuum in hand, you want to wear protective clothing in case things don’t go as planned. You may not get all the wasps, so make sure that the few that get away aren’t going to be able to sting you. Cover your arms, legs, hands, and face completely.

You should also have an escape route planned if there is a large swarm coming after you. Have everything assembled and ready to go before you go near the nest. Wasps are good at sensing something or someone is near their nest, and they may begin to attack immediately. Be ready to turn on the vacuum and get to work, so you get the upper hand on the situation.

Canister vacuums are very popular for removing wasps yourself. They’re cost-effective because you don’t have to replace the traditional bag used in older models. They’re also safe to use for wasp removal because you can see what’s going on inside the canister. Removing an enclosed bag could reveal several live wasps.

You can postpone emptying the canister until you’re confident that everything is safe. High suctioning motors will provide enough power to suction wasps one after the other without loss of power. You want to have enough airflow towards the vacuum that the wasps can’t fly away.

Shop-vacs are also very effective due to their wide nozels, ability to hold water and large empty canisters.

There are units for sale that allow you to safely trap the wasps without harming them. You’ll be able to humanely let them go somewhere else that is away from your home and property.

If you’ve decided to use a vacuum to remove wasps from your property, ensure that you assess the equipment you have (or need) and plan out the process before you get started.

You don’t want to grab your vacuum, turn it on and begin targeting the wasps you’ve found without a well thought out plan. If you are not comfortable vacuuming the wasps yourself, you should reach out to a local was removal expert. Wasps in the Summer: What to Expect