Diatomaceous Earth vs Borax for Silverfish 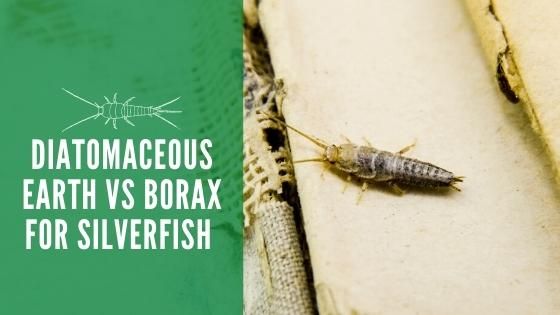 Silverfish are wingless insects with long antennae and elongated silverish-colored bodies. There’s no evidence that shows these bugs are dangerous. However, these pests can be very destructive and destroy books, clothing, and other items. Which is better to eradicate them, though, diatomaceous earth or borax? Let’s discuss.

What Is Diatomaceous Earth?

Diatomaceous earth is fossilized algae, making it a natural substance. Specifically, it’s comprised of the shells of diatoms. When you get this substance, it’s in a powdered form. And although you can’t feel it, the insects do — it consists of shards.

This substance is rich in the mineral silica, and silica makes up more than one-fourth of the Earth’s crust. You can find it in clay, sand, and rocks. As a general rule, food-grade diatomaceous earth is safe for humans and is sold for pharmaceutical purposes. It’s also found in the human body, specifically in your bones, hair, and blood vessels, among other places.

Additionally, you can also find diatomaceous earth available as an insecticide. However, you can use the consumable version to get rid of pests, such as ticks and bed bugs, ants, and cockroaches.

Will Diatomaceous Earth Get Rid of Silverfish?

Yes, diatomaceous earth will get rid of silverfish. It can be used in bait for silverfish. And when used in this manner, the silverfish will consume the bait, and the substance will dehydrate the insect.

On the other hand, silverfish have a waxy coating that makes up their exoskeleton. It’s used to protect these creatures’ insides. The silica of the diatomaceous earth comes in contact with the exoskeleton and wears it down. The pest becomes dehydrated because it can no longer retain water without that coating.

How to Use Diatomaceous Earth to Get Rid of Silverfish

One of the more common ways to get rid of silverfish using diatomaceous earth is to mix it with bait. These pests can’t sense the substance is the food but will come to grab a quick bite. Then, the diatomaceous earth will kill them. You can make a bait paste from flour and water.

You can also sprinkle the substance on the entryways of these pests. Then, once they walk over the top of it, the substance will coat their exoskeletons and cause the waxy coating to wear away.

Another way to use diatomaceous earth for silverfish pest control is to sprinkle it directly on the silverfish as you see them. This works better when you have a group of them, so you’re not wasting time trying to get one at a time.

Fortunately, this method of killing silverfish will continuously work because the insects can’t build up a tolerance for this substance since it physically dehydrates them or destroys their exoskeleton.

How Long Does it Take Diatomaceous Earth to Kill silverfish?

When you’re using diatomaceous earth by sprinkling on the insect or on entryways to your home, it tends to take around 48 hours to kill the pests. Keep in mind that if you’re sprinkling it on multiple groups of silverfish, it could take several days to take care of the entire infestation successfully.

Moreover, if you’re using diatomaceous earth as bait, it could take some time to see results. These pests can go quite some time without eating. Some silverfish have gone up to about a year without eating, and they only live an average of three years.

Known by its chemical name sodium tetraborate, borax is a mineral salt from dried sea beds. One example, in particular, is Death Valley in California.

This substance comes in a granular form. It’s been used as a natural cleaner for years, and it’s also been found to work as an insecticide on certain pests, including cockroaches, ants, and spiders. It may also help you get rid of silverfish.

How to Use Borax for Silverfish

You could make a spray that consists of an essential oil like lavender, water, and borax. You can use this spray regularly to kill and repel silverfish.

Since silverfish will go for bread, at least when they want to eat, you could leave out a piece of bread with borax on it.

Another way to kill silverfish with borax is to sprinkle it in places where you find silverfish the most. Remember that these creatures are nocturnal, so they could be in your home, and you do not know it because they’ll bunker down during the day.

The most common places to find them are moist and dark places, such as under your washing machine, bathroom, behind walls, or kitchen sinks.

Is Diatomaceous Earth or Borax Better for Silverfish?

Both diatomaceous earth and borax will kill silverfish. It’s more effective to sprinkle either substance where these pests are more likely found in your home than it is as bait. Both of them work similarly.

Due to its powder form, it may be easier to place the diatomaceous earth in certain areas than borax.

Since they both work in similar manners, choose which one you feel is safest for you and your family.

As a general rule, if you’re getting the consumable diatomaceous earth, it won’t harm you, your family, or your pets. They can even eat it, and it wouldn’t harm them. You, however, should be careful when laying down the substance. If you inhale too much of it, you may notice your lungs feel irritated.

Borax is relatively safe, but you must be careful. If too much of it comes in contact with your skin, it could irritate it. On the other hand, it can cause digestive problems, like nausea and vomiting, if consumed. In larger quantities, it could be deadly to children or pets.

We should note that borax has been linked to reproductive issues, particularly in men.

In general, diatomaceous earth will work to eradicate silverfish and isn’t known to cause much harm to humans or animals. If DE doesn’t work for your silverfish problem, you can try borax.