Borax and Honey for Ants Borax is a powdery, white substance consisting of sodium, oxygen, and boron. It’s used as a cleaning solution and laundry booster. And you may have heard that, along with honey, it’ll get rid of ants. But is this actually true?

Basically, borax is a hydrated salt of boric acid. Borax is a mineral occurring naturally in the Earth, while boric acid is a human-made solution created from borax and a potent acid. At one point, borax was a widely used cleaning solution. It was used for laundry, floor tiles, and other surfaces. It is still used as a laundry booster and cleaner, but it’s not sold as much. Borax has also been known to help with fungi.

In some countries, borax is used as a food additive, though other countries like the US have banned it. It serves the purpose of preventing bacteria and mold growth by increasing the shelf life of these products and preventing humans from becoming ill over tainted food.

Borax is also used in some cosmetic products as a preservative, emulsifier, or buffering agent, though it was much more common before. Examples of products that could contain it include the following:

While it’s not as common nowadays, you may still find it in major retail stores. You can also find it online.

How Do You Make Borax Honey ant Traps?

One recipe you may use contains quarter-cup borax, half a cup of honey, and two tablespoons of boiling water. You first dissolve the borax in the boiling water and then add it to the honey.

Then, you place the solution on a plate or other semi-flat surface on the ground, and the ants will be attracted to the honey and not realize that it’s mixed with borax. You may also soak a cotton ball in the mixture and place it around your house for the ants.

The ants will consume the honey-borax mix, harming their digestive tract. They will eventually starve to death. As a result, it’ll gradually kill them.

Because it’s a slow death for the ants, they have time to return some of this borax and honey solution to their nest and give it to the rest of the colony, infecting additional ants.

How Long Does it Take for Borax and Honey to Kill Ants?

Keep in mind that it can take a few weeks for you to target the entire colony using the borax and honey trap. That, however, doesn’t mean it’s not an effective solution. This is a strategy that requires patience.

Fortunately, if you don’t have honey, you may use other sweet substances to mix with the borax, and they’ll work similarly.

For instance, you could mix sugar and borax. While you could use the two on their own, it helps to add a bit of warm water to the solution to create a thick, paste-like substance. This ensures the borax mixes throughout the solution.

Another option you have is to mix shortening, sugar, and borax. You get the paste consistency to keep the mess contained while effectively targeting the ants.

You could use either powdered sugar or graduated sugar for this recipe. It’ll change the consistency of the final product but won’t affect the solution.

Rather than honey, you may use a sugary syrup along with boiling water and borax. The result is the same. When borax is mixed with honey or many other sweet substances, it can effectively rid your home of ants, especially as they carry it back to the rest of the colony. Borax may be considered non-toxic, but keeping any traps out of reach of small children and pets is best. Get Rid of Ants in Kitchen 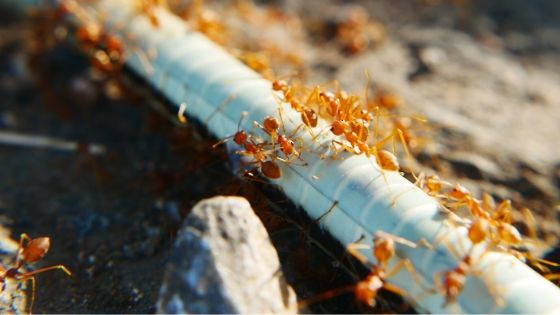